Adopt a Storm Drain, a new program aimed at protecting area lakes, rivers, and wetlands, has just launched in the Twin Cities. Residents in the seven-county metro area and Rochester are invited to “adopt” a storm drain by committing to keep it clear of leaves, trash, and other debris. The simple act of sweeping up around a storm drain protects local lakes and rivers by preventing pollution from entering our shared waterways.

Residents can sign up to adopt a storm drain at Adopt-a-Drain.org. Simply create an account with your name and address to claim your storm drain. Once you’ve signed up, Adopt-a-Storm-Drain will send you tips on how to clean up safely.

When you adopt a storm drain, you become part of Adopt-a-Drain.org’s network which invites you to share stories and photos with neighbors through social media, encouraging others to take action on behalf of local waterways. The quantity of debris you collect will inform annual reports on the collective impact we’ve had on local lakes and streams through the Adopt-a-Storm-Drain program.

Perhaps you’ve already noticed Adopt-a-Drain lawn signs in your neighborhood. The Adopt-a-Storm-Drain program began in Saint Paul in 2014 with support from the City of Saint Paul and the Capitol Region Watershed District and has since been piloted in other cities. All told, more than 3,000 residents in pilot cities have adopted 5,401 drains to date. In 2018, residents prevented more than 35,562 pounds of debris from washing down storm drains and into lakes and rivers just by sweeping up around storm drains.

Residents of Saint Paul put their own spin on the invitation to Adopt-a-Storm-Drain, making it a neighborhood challenge. A friendly rivalry started last summer when Hamline-Midway residents challenged their neighbors in Como to see which neighborhood could adopt the most storm drains. Several other neighborhoods have since joined the competition, and thus far, Como is in the lead with 60 drains adopted by 116 new participants.

Lucy Hunt, a resident of Saint Paul’s Hamline-Midway neighborhood, took the lead on the Adopt-a-Drain challenge last summer. On National Night Out, she brought her drain clean-up kit — gloves, a rake, a broom, a dust pan, and garbage bags — to nearby block parties. Her goal was to show neighbors just how easy adopting a drain can be. “It’s not a huge time commitment, and the results on water quality are dramatic,” she said.

Last August, Adopt-a-Storm-Drain debuted at EcoExperience at the Minnesota State Fair. More than 700 residents from 73 cities around Minnesota signed up to adopt a drain. Participants took home a goody bag with a lawn sign and tips to get started. After learning about the program, Dee, a new homeowner in Rosemount, was inspired to make a difference in her neighborhood. “Only rain down the drain!” she said.

It’s obvious that trash, road salt, and chemicals harm lakes and streams, but it may be less clear why “natural” debris like leaves, grass clippings, and fertilizers are also a problem. When it rains, leaves wash into storm drains that flow directly into the nearest lake or river. Decaying leaves and grass release nutrients into the water that feeds excess growth of algae.

If the surface of a lake or river is covered with a green film of algae, it prevents oxygen from reaching the bottom and chokes out native plants and animals. When you adopt a drain, you prevent harmful pollutants of all kinds from entering bodies of water. Sweeping up around drains will help create healthier habitat for all the plants and creatures that depend on our waterways.

Imagine a future where your local river or waterway was clear of algae, trash, salt, and sand. Crystal clear waters are healthier for wildlife, aquatic plants, and the millions of residents who depend upon surface water as a drinking supply.

In order to protect the lakes, rivers, and streams that Minnesotans call home, we need all hands on deck. There are more than 300,000 storm drains in the metro area, and every last one of them flows into a local waterway. Adopt-a-Storm-Drain is the largest adopt-a-drain program in the country, and you can be a part of the change. Sign up at Adopt-a-Drain.org today. 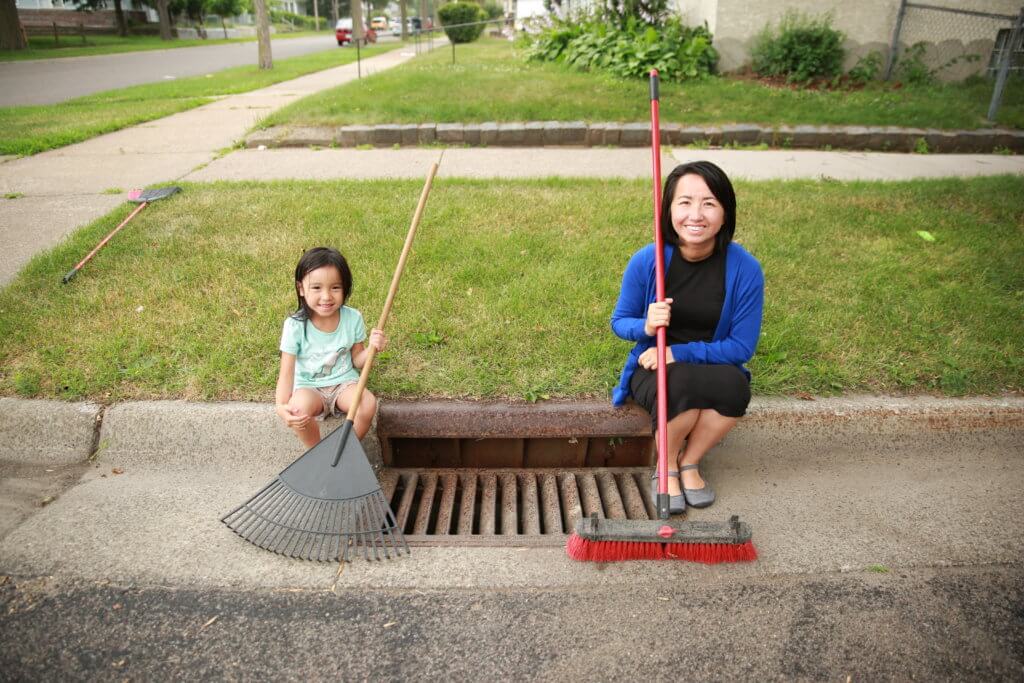 Low Salt, No Salt Minnesota Campaign Rolls Out
A new education and assistance campaign - Low Salt, No Salt Minnesota - aims to teach and empower decision makers at homeowners…
Read full post
Leave the leaves in your yard—but not in the street
​If you are a reader of a certain age, you may have wondered, ‘Where have all the lightning bugs gone?’ Just because many of you…
Read full post
Clean In and Clean Out . . that includes your bait, too
Great news! 90% of Minnesota Lakes are still free of invasive species, so let’s keep it that way. This means, after a day of…
Read full post
Planting Shorelines to Protect Water Quality
The city of Blaine is home to a unique, man-made body of water: Sunrise Lake. Dug nearly 20 years ago, Sunrise Lake won’t appear…
Read full post